‘The plan wasn’t to go backwards all the time’ — Burke 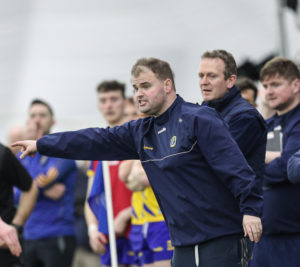 Roscommon senior football manager Davy Burke has vowed to encourage his players to be more positive with possession in the aftermath of Friday evening’s FBD final defeat against Mayo.

While the Rossies were more solid defensively from the previous week’s victory against Sligo, the manager admitted that he was frustrated to see his players moving the ball backwards, especially from frees.

“The plan wasn’t to be as negative and go backwards all the time. I’m not sure where this backwards from every free came from — I’m certainly going to try my best to get that out of the lads.

“I look for a bit more positivity myself, but you have to be pragmatic too — I understand that. You can’t be kicking the ball into 15 men behind the ball, but I would like to see a better, more offensive plan.

“But we’re only early days yet, we haven’t done a huge amount of coaching between weather and big panels. But we’re getting there,” he assessed.