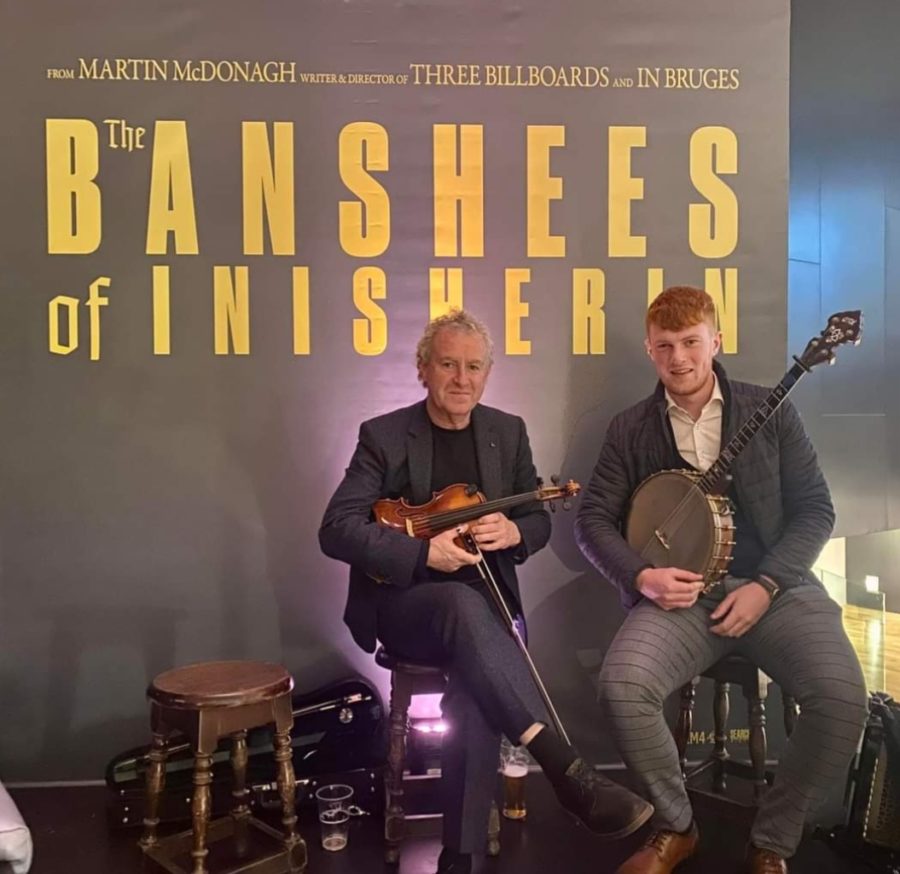 John Carty, Boyle and Ryan Owens, Strokestown at the Dublin premiere of The Banshees of Inisherin. 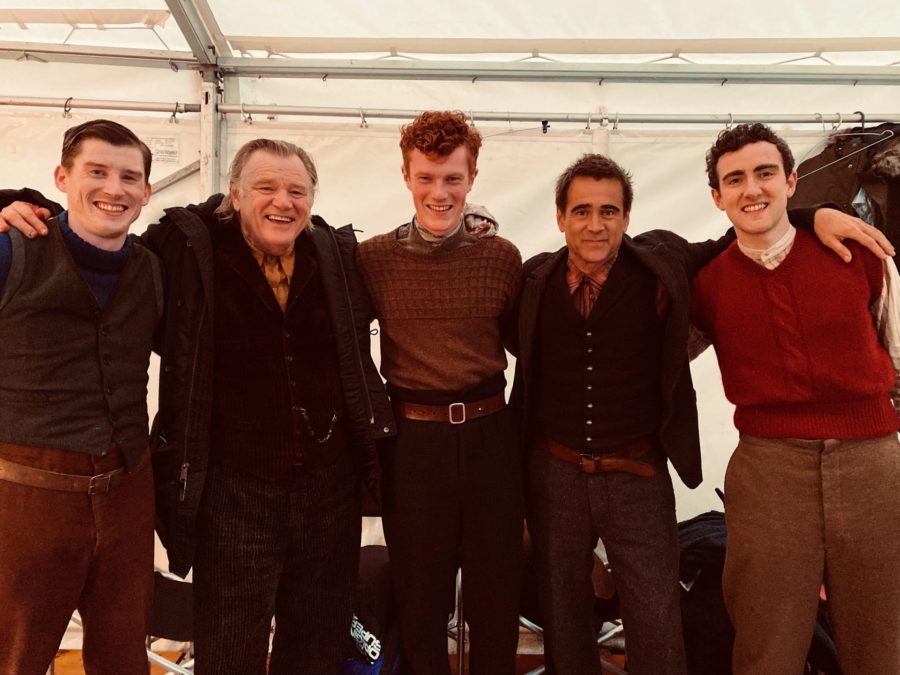 Experience of a lifetime for Strokestown native

Picture the scene on the set of The Banshees of Inisherin: a young and talented Roscommon Sean-nós dancer wowing the stellar cast with his steps while renowned Irish actor, Brendan Gleeson provides the musical accompaniment on the fiddle.

It wasn’t a dream for 20-year-old Ryan Owens but among many special memories for the Strokestown native, one of three Roscommon men who featured in a film set for major awards this year.

Ryan, who is a talented musician as well as a well-known Sean-nós dancer, recalled that moment which he will always treasure. “I remember one day we were shooting out on Achill island and Brendan, Sheila Flinton (who plays Mrs McCormick in the film) and I were chatting in the cast tent, which was right next door to the set where we were filming, when Brendan asked me to dance for Sheila while he played the fiddle for me.

“As I finished dancing, I realised that Martin (Film Director), Colin Farrell and the rest of the cast had stopped the filming of a scene to come out and watch me dance. It was a sort of a pinch me moment when I saw them all and how happy they all were to get a break from constantly being in character. It’s a stand out moment that will stay with me for life,” he said.

Ryan, along with Boyle native James Carty, played the role of a student musician being taught by one of the lead characters, Colum, played by Brendan Gleeson. A previous musical connection with the acting star is how he got involved with the film.

“Brendan got in touch with me and asked me would I like to be part of the film production as a musician. I have previously played music with Brendan before so I already knew that he was such a gentleman and it made the experience so much more enjoyable,” he said.

Needless to say, working on the same set as Colin Farrell was a special experience too. “It was my first time meeting Colin and he made me feel at ease throughout the shooting of the film which made the whole experience so exciting.”

In August 2021, the audio for the movie was recorded in Galway and that took approximately four days. The following month, Ryan travelled to Achill for a week to shoot the scenes in which he was involved. “We lived on the island for that week which was very enjoyable because we got the opportunity to get to know the rest of the cast on a personal level.”

Ryan’s strong passion for traditional music and dance has been with him since he was a child. His main instrument is banjo but he also plays bodhrán, guitar and drums. He played bodhrán in the film.

“My love for this stemmed from my mother’s side as her father and grandfather were great musicians and dancers and that passed on through the generations to me and my brother.”

He also teaches both music and dance at the weekends and participates in many festivals and concerts throughout the year. “My dream one day is to become a full-time musician and dancer.”

Working on The Banshees of Inisherin was the experience of a lifetime for Ryan, who is now looking forward to more possible film roles.

“I participated in a small film a few years ago called ‘Penance’ which was directed by Tom Collins. Yes I would love to do more films if the opportunity arises!”

It must have been a very special time for the Carty family when father John and son James both got involved in The Banshees of Inisherin.

The Cartys, who hail from Knockroe just outside the town of Boyle, are renowned in the world of traditional music and those native sounds are among a number of important elements in the movie. Father and son may not have been in the same scenes but advance rehearsals in Galway did bring the whole cast together beforehand.

“The whole film was rehearsed first in Galway with Director Martin McDonagh. For those rehearsals, we were all in together but we (James and his father) were in different scenes so we weren’t actually on the set together,” explained James, who spoke to the Roscommon Herald from London. The 31-year-old has lived there for the last seven years working predominately as a musician and as a music teacher.

Both he and his father John play the role of musicians in the movie, and like fellow Roscommon man, Ryan Owens, James plays the part of a student musician under the tutelage of the character Colm, a fiddle player and composer played by Brendan Gleeson.

Working up close with Brendan, Colin Farrell and other established actors during his week on the set back in September 2021 has certainly left a lasting impression on James.

“It was great to see Colin and Brendan in action. Their enthusiasm and passion are infectious, they would inspire you, great people – also the likes of Pat Shortt and John Kenny. We had the best of fun over the week. I also enjoyed the opportunity to spend time with the other musicians Ryan, Conor Connolly, Ollie Farrelly, Conor Byrne and the Musical Director, who is from Dublin.”

And despite Farrell’s big movie star status, James said the famous actor couldn’t have been more down to earth. “Colin’s a master craftsman. I think himself and Brendan are great ambassadors for our country.”

He was also highly impressed with Director Martin McDonagh who adopted a forensic approach to creating the sights and sounds of Ireland in 1923, the Civil War period in which The Banshees of Inisherin is set.

“In the rehearsals, we went through every little detail – Martin is meticulous. We tried different options in terms of instrumentation, and key signatures. He was very clear about the sound he wanted,” he said. “Every little seemingly minute detail, careful thought went into it. The music is a relatively small part of the film but when you think of the number of hours, the detail and sheer number of personnel involved, it was a massive undertaking.”

The use of a pre-1920 accordion by Galway musician Conor Connolly in the film illustrated that level of detail while James, a talented fiddle player, had to play without a shoulder rest as they hadn’t been invented in those days. The fiddle he’s had since childhood certainly fitted the role as it was made back in the 1800s.

So how does he feel now, knowing that this black tragicomedy is being tipped for major awards in 2023, including Oscar and Golden Globe success?

“It’s no coincidence when you get the good musicians involved, the awards will follow!” he joked before capturing the feeling around the set when he was there. “You immediately picked up the sense that it could be something special. There was an palpable air of excitement and positivity among all the cast and crew.”

It’s clear that James has caught the movie bug and he would love to do some more film work in the future.

“I have really fond memories of working with great people in a really stunning place. Yes, if the opportunity arose, why not?”