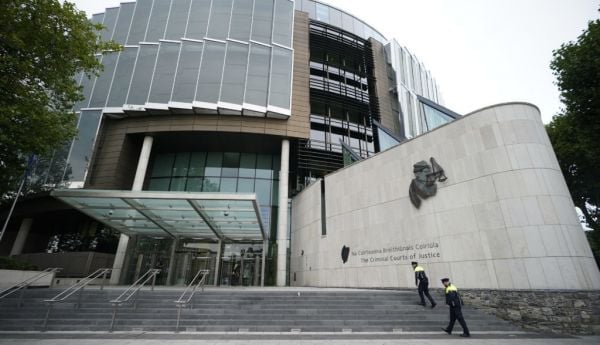 Two women have gone on trial accused of trafficking two Brazilian women, who were allegedly moved between rural Irish towns and required to work as prostitutes.

On the first day of the Dublin Circuit Criminal Court trial, Garnet Orange SC, prosecuting, said the trial would “give an insight to a side of the country many of us weren’t aware of”. The trial is expected to run for six weeks.

Natalia Nogueira Da Silva (32), of Cairn Hill View, Drumlish, Co Longford, pleaded not guilty to one count of human trafficking a woman at an unknown location within the State on dates between March 31st, 2019 and May 18th, 2019.

She pleaded guilty in front of the jury to one count of organising prostitution at an unknown location within the State on dates between December 5th, 2018 and May 18th, 2019.

She also admitted one count of facilitating the entry into the State of a person she knew to be illegal on March 31st, 2019 at Dublin Airport, along with 33 counts of money laundering the proceeds of crime on dates between March 2020 and May 2021.

Da Silva’s co-accused, Ivanilce (Lisa) Vailones Fidelis (46) pleaded not guilty to all 18 counts against her.

Vailones Fidelis, of Castle Manor, Racecourse Road, Roscommon, denied two counts of human trafficking two women at various locations within the State on dates between December 2018 and May 2019. She pleaded not guilty to one count of organising prostitution during the same time period.

Vailones Fidelis further pleaded not guilty to 14 counts of money laundering the proceeds of crime on dates between January 2015 and December 2020 and one count of removing proceeds of crime from the State during the same time period.

The State alleges the two accused women trafficked two vulnerable Brazilian women for the purposes of exploiting those women and taking advantage of their vulnerability “to such an extent as to cause the trafficked person to have no real or acceptable alternative but to submit to being trafficked”.

Opening the case to the jury, Mr Orange said it would hear evidence the two Brazilian women, who cannot be named for legal reasons, were living “hand to mouth” in their home country before they arrived in Ireland. He said the women did not have visas, but had been told there was a scheme where they could enter the country and take up work.

“Very soon after they arrived, they realised it was expected of them that they would be engaged in prostitution,” Mr Orange said.

The prosecution said the trial would hear that the women were not known to each other. They were met separately at the airport before being taken to various rural towns, where they were expected to work as prostitutes for one week before being moved on to another town.

Mr Orange said the jury would hear evidence that the two accused women were “actively involved in organising [the two women] as prostitutes within the State”.

“Ms Da Silva has pleaded guilty to that,” he added.

“You’ll hear of towns around the country to which they were brought, week after week after week,” Mr Orange said, saying the women spent time in accommodation in Portarlington, Thurles, Tralee, Enniscorthy and Roscommon, among other places.

Both women had profiles on a website called ‘Escort Ireland’, which the prosecution alleges were set up by the two accused.

“Escort Ireland seems to have been central to the organisation because it provided the means by which clients or customers made arrangements to meet prostitutes,” Mr Orange said.

The prosecution case is that the women couldn’t “just walk away” from their situation for two reasons – the first being that they were allegedly in a “debt bondage” situation whereby they owed money for their plane tickets and other expenses and were being charged “exorbitant” rent for their accommodation.

Debt bondage leads to a situation where “you can walk away once you’ve paid your debt, but you can never earn enough to pay the debt”, Mr Orange said.

The second reason the women did not leave their alleged situation was because they were being threatened, the prosecution alleges.

Mr Orange said the jury would hear “evidence of threats, and apprehensions in general, not just for their own safety but the safety of their families in Brazil”.

Mr Orange said the jury would hear how the women did eventually go to gardaí and how the investigation against the two accused women then commenced.

The first complainant in the trial gave evidence on Tuesday via videolink. Speaking through an interpreter, the 35-year-old woman told the court that in 2019, she was living in her native Salvadore, Brazil with her two children.

The woman told the court Lisa told her to tell immigration that she was staying with friends, which she did, before she was met by Natalia outside the airport. She said she was brought to Penneys to buy clothes, given an Irish Sim card for her phone and then driven to an apartment in Portarlington.

She said it was the next morning that she was phoned by Lisa, who told her she would be sending men to the apartment.

The woman said she was told “everything I was supposed to do in relation to prostitution” and that she got “very nervous”. She told the court she rang the third party who had first told her about coming to Ireland.

“[This person] told me I should avoid confrontation with them because it wasn’t safe, I should wait for three months to be up and then I could leave,” the woman said.

The trial continues before Judge Patricia Ryan and a jury.